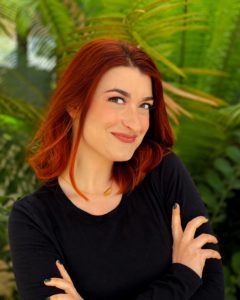 Sarah Berman is a seasoned comedian, voice-over artist, and puppeteer with a consistent history of creating puppet-driven content for educational institutions, theme parks, social media, and television. She is best known for playing the titular role of WAFFLES in Michelle Obama’s, Waffles + Mochi on Netflix (season 2.) Currently, she can be found as the Co-Creator of the Pacific Pals puppetry program at the Aquarium of the Pacific, teaching ocean conservation to explorers of all ages. Sarah is a modern-day Ginger Rogers, doing everything the boys do, but backwards, in high heels, and with a puppet on her arm.