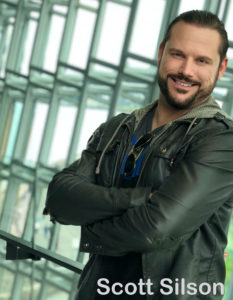 Scott Silson was born into a family of traveling musicians and has been a professional puppeteer, actor, vocalist, director, writer and songwriter.  As a puppeteer he has has been seen on Crank Yankers (Comedy Central), The Little Mermaid Live (ABC), CLAWS (TNT), Sesame Street 1-2-3-4D (Universal Studios), and Heather Henson’s “Handmade Puppet Dreams” to name a few.  Scott also spent many years with the Walt Disney Company and held the esteemed position of Disneyland’s first Puppet Master.  He has led the show direction, choreography, and training of all puppetry performers and roles in versatile Disney productions all over the world including Walt Disney World’s revered “Finding Nemo the Musical”. He has also collaborated with Walt Disney Imagineering as a Creative Associate, Show Director and Writer. He has over two decades of professional experience in performance and creative production for stage and film/TV (including “Dancing With The Stars” and “Wheel of Fortune”).  He’s had the pleasure of collaborating and/or working with other revered companies such as Universal Studios Japan, The Muppets Studio, and The Jim Henson Company.  He has also partnered closely on puppet design concepts with notable industry puppet vendors including Michael Curry Design Inc. of Broadway’s “The Lion King” fame and the Jim Henson Creature Shop.