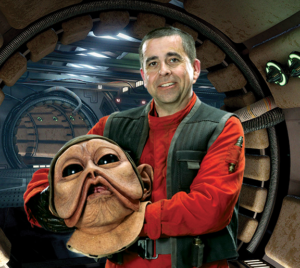 Mike Quinn is most famous for his role as Nien Nunb, Lando’s copilot for the Millennium Falcon in Return Of The Jedi and the final Star Wars trilogy and the Disney Theme Park ride Rise Of The Resistance.
Other characters he assisted with in Jedi were Yoda, Jabba, Baby Ewoks, Sy Snootles, Admiral Ackbar and Ree Yees.

His 40+ year career has seen him working on both sides of the camera as a Director, Producer, Actor, Character Animator, Puppet Builder, Puppeteer and Voice Over Actor.

He was personally chosen by Jim Henson and Frank Oz to work on many Muppet projects including The Great Muppet Caper, The Dark Crystal, Fraggle Rock, Labyrinth, Muppet Christmas Carol, Muppet Treasure Island, The Muppets, Muppets Most Wanted and the ABC TV series The Muppets and Muppets Now on Disney+

Other movies and TV shows he performed in include Who Framed Roger Rabbit?, Little Shop Of Horrors, How To Get Ahead In Advertising, The Storyteller, Glee, Lady Gaga and The Muppets, Good Luck Charlie, Shake It Up, Muppets Wizard Of Oz, The Secret Life Of Toys, The Ghost Of Faffner Hall, Jim Henson’s Mother Goose Stories and the recent Jim Carrey series Kidding.

As a character animator he worked at Pixar and ILM/Lucasfilm on A Bug’s Life, Toy Story 2, Star Wars: Attack Of The Clones and Jurassic Park III.

When not working with the Muppets and elsewhere, Mike keeps busy building puppets, developing projects for Film & TV. He also runs an online puppetry academy called Secrets Of Puppetry, the only one of its kind teaching high level hand puppetry skills to aspiring puppeteers.

Mike is British but splits his time between the UK and USA as he is a permanent resident of the USA.