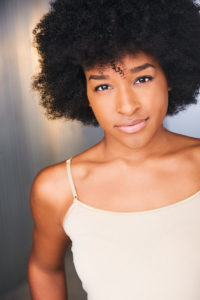 Bryce Charles earned her BFA in Musical Theatre from AMDA College and Conservatory in Los Angeles. She has toured with the Tony award-winning musical The Book of Mormon and filmed a TV Pilot for ABC called “Woman Up!”. Other credits include: Clara in Passion at The Boston Court Pasadena, and Sarah in Ragtime at The Pasadena Playhouse for which she received an Ovation Nomination for Best Featured Actress; TV co-star roles on “Blackish” (ABC), “Fuller House” (Netflix), “Teachers” (TV Land), “Scroll Wheel of Time” (Eko); and recurring roles on “Encore!” (Disney+) and “Tales of the City” (Netflix).