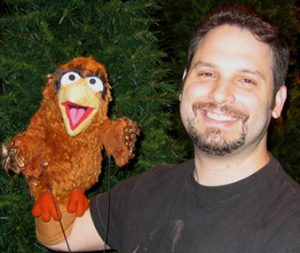 Artie Esposito is a puppeteer who’s credits include The Muppets, Sesame Street, Crank Yankers, The Simpsons, The Pee-wee Herman Show, and recently as the puppeteer behind Baloo the Bear in Disney’s live-action “The Jungle Book” film. In 2009, Artie was honored to be chosen to understudy the role of Kermit the Frog, and has performed him in a number of high-profile appearances and on the Broadway stage. Artie lives in Los Angeles with his beautiful wife and two loud kids.